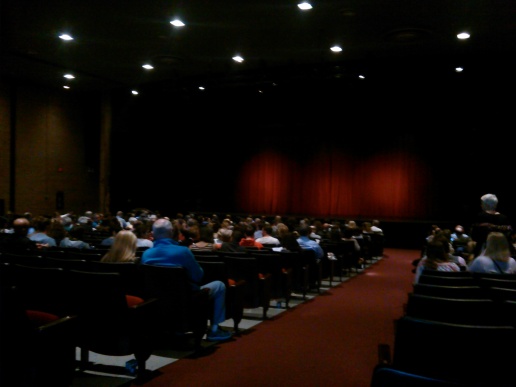 (Editor’s Note: Apologies for the simplistic description and lack of technical proficiency. I wish I could break down the dances with greater knowledge, but it is beyond my capabilities at this time. Also I had to work from memory.)

The first piece on the program was George Balanchine’s “Valse Fantaisie” a ballet featuring Mollie Sharples, Celina Lopez, Katie Schenker and Ryan Bulson. It was exquisite. In Ballet whether it is pointe work, balances, or the leaps, it is an athletic, and beautiful event and this performance exemplified that. The dancers performed well, and were well costumed.

The second piece was a modern dance number “Guernsey Field” set on a farm, as the various troupe members danced across the stage in midwestern style dresses. Katherine Bittner and Kirsten Schranze performed a number as playful sisters flying around with great energy. Then came the matriarchs with far more serious results and sadder dancing. These performances were sandwiched in between larger cast group dances with many leaps and tons of movement, as the dancers spent a great deal of time just running, before engaging in simultaneous leaps. The dance was choreographed by Katie Stevinson-Nollet.

The third piece, excerpts from “Psalm”, was far more dramatic than the light fare that had preceded it. The Psalmists as a group had to perform intricate synchronized maneuvers in addition, and often times at high speed. It was hard to convey the feeling of seeing the dancers move that quickly in motion. Kareem Lewis took on the role of the Burden Bearer and his incredibly powerful well executed dancing showed the torment he was in. Michelle Cuddy was the other soloist playing the Expiatory Figure and she danced fluidly. Marjorie Gross, Lauren Turley and Lewis also worked as a trio multiple times as they played off each other. Psalm is based on the idea that “according to ancient Jewish tradition, all the sorrows of the world rest within thirty six Just Men…the dance is a history of one such Just Man.” (Hartt Dances Program Notes). The dance was choreographed by Jose Limon.

After intermission, the audience was treated to “Host” choreographed by Gemma Bond of the American Ballet Theatre who was in attendance. The ballet was premiered during the Hartt Dances weekend set of performances. The piece through music and visuals evoked beatniks and hipsters and opened with Lewis with a solo in this piece as well. In the 2nd movement the whole cast arrived on stage including Calvin Bittner (who was also supporting in Psalm) joining Lewis, and the ballerinas all clad in simple black outfits, one wore glasses, one a beret, another a black bow. Lopez, Sharples, and Schenker, the ballerina’s from the first performance were joined by Psalm performers Turley, Cuddy, and Victoria Sames as well as Emily Aubrey and Jennifer Binversie. In the third movement, Bittner and Lewis interacted with Sames, Schenker, and Sharples, before the final movement closed with the entire cast on stage. There was a great deal of lifts in this ballet among, and the beat was relaxed and chill, as the dancers transitioned with their compatriots often just slightly grooving. It was a unique event especially in contrast to the traditional Balanchine that opened the performance.

The performance closed with “Four Chapters from a Broken Novel” originally choreographed by Doug Varone who did assist Hartt in setting up the dance. The modern dance admittedly went over my head, but what did not was the skill of the performers. The dance knitted together four parts of a 20 part dance suite and was filled with furious action. Whereas Psalm moved quickly, Four Chapters did as well but in a different way. There was a lot of chaos and also more cases of confrontational dancing, where oftentimes one dancer was still as another exploded with elements right in front of them. At one point, one of the dancers seemed at war with the rest, being pulled with them, but trying to knock them away. The abilities and execution of the group was exemplary.