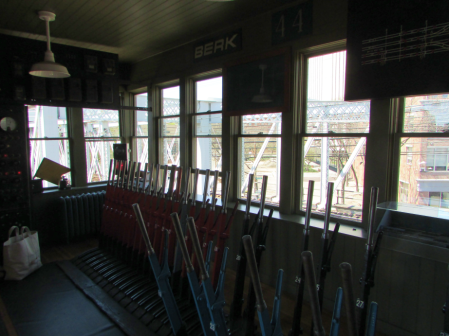 The SONO Switch Tower Museum is a fascinating piece of railroad history. After rolling past it on Metro North numerous times I finally stepped inside. Before the system became automated in the eighties, trains were routed onto various tracks by manual efforts by operators inside towers up and down the rail line. They used levers to change the direction of the track, and also signal to the train conductors what was occurring. Obviously the goal was to move a lot of trains without putting them on the wrong track and causing accidents. 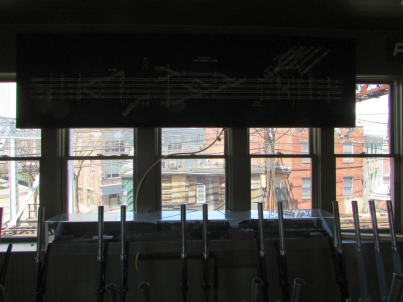 The mechanical system was designed to have safeguards, which didn’t allow some tracks to be moved until they were unlocked. The operators were given a master time sheet for all the trains expected, if there was a delay, a system of radios would allow dispatchers and tower operators to communicate. In the event a train had to deviate from its original plan, a dispatcher in New Haven would send a “Train Order” to a tower operator, who would then write it down word for word, and then repeat it back to the dispatcher. Only once the wording was exactly matching would it be signed off on. During this operation, numbers were spelled out to make sure there was no mixing up of them. The operator would grab a long stick device and tie the order to it before bringing out to the tracks holding it up so a train conductor could grab it from the passing train. 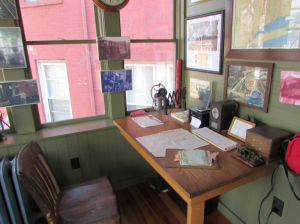 The operators also had a role in the power supply to the line. If there was some sort of malfunction a large power board on the far end of the tower would set out a shrill alarm until addressed. The operator would go over and place a small cap on the affected area before contacting the power company. They would then try to deduce if it was a small short, or something more complicated. In the event it could not be figured out, the operator might ask a passing train to see what they see as they passed the affected transformer.

One of the men speaking about the tower had worked in it for a long time, and he explained also that the tower operators were charged with watching the trains to make sure they were all right. They would watch a freight train and signal to the rider in the caboose that nothing was wrong, or alternatively if something looked odd. They also checked to make sure the red indicator lights on back of the train were lit. As a train passed, the speaker instinctively turned his attention to it to make sure the indicator lights were on.

The top floor of the small tower is dedicated to the levers, the second floor gives a view of the mechanism behind it, and also holds some memorabilia of the past railroad. The current exhibition featured the Penn Central line.

The museum is open May through October on Saturday and Sunday. For more information you can visit their website.